A Prayer for Unity

A Prayer for Unity 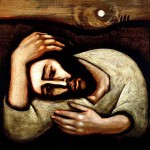 The entire chapter 17 in the gospel of John is a prayer. The context of this prayer is the last night that Jesus was with his disciples. They were sitting together at table for the Passover meal. Jesus has offered a long farewell discourse before their move to the Garden of Gethsemane where they would spend that fateful night when Jesus was arrested, put on trial, and condemned to death.

Mother’s Day is a good day to talk about prayer. Among my favorite prayers in my mother’s home is the one that hangs in the guest bathroom. As you stand at the sink, washing your hands, you cannot help but notice this prayer:

“O Lord, Thou knowest how busy I must be this day.
I just might forget Thee; do not Thou forget me.”

The old English prayer reminds us that Jesus prays for us still, like he prayed for his first disciples. The Holy Spirit intercedes for us still with sighs too deep for words. When we get busy and our own prayers falter, the community of the Trinity – Father, Son, Holy Spirit – knows what we need even before we ask.

Mothers are prone to worry about their children, about their futures. What will they do in life, will they be ok, will they have a job, will they have a good place to live, will they be surrounded by people who are mostly good and not bad influences? Over time, mothers learn the necessity of praying for one’s children in order to maintain sanity. Especially in May, when loved ones are graduating, finishing one grade and moving to another, when one’s beloved is moving from one season of life to another, when there are many uncertainties about what is yet to come,
both mothers and fathers learn the necessity of prayer.

Worry and anxiety, of course, are related to fear – fear of the unknown, fear of the future, fear of factors beyond one’s control. One of the encouragements of Holy Scripture is not to live in anxiety and fear, not to live with worry, but instead to live in prayerful trust of God, live in hopefulness and joy, instead of concern and fear. We are encouraged as believers to lay all our burdens and anxieties upon the One who is far more able to shoulder them than we are.

In reading the Farewell Discourse in John, which culminates with this prayer, Jesus sounds almost like an anxious parent. Jesus, about to depart physically from his disciples, seems almost fearful about their future. Of course, we cannot hear his tone of voice or see his face, but, in this text, when Jesus is preparing to depart from his “children”,
he is obviously very concerned about the effects of the world upon their lives. Jesus is concerned for their unity after he, who has been their “glue”, will no longer physically with them. He is concerned that any new members of the family might cause division rather than further build that unity.

This prayer of Jesus could be likened to a prayer of a dying grandmother who prays for the unity of her adult children, not simply for their sakes, but for the sake of her grandchildren and those yet to be born. In the prayer, Jesus offers a plea before God for the unity of all who follow him for the sake of those who would yet follow them.
Jesus’ prayer for his band of disciples was not only for the edification of those present, but for the sake of the world they would reach. Jesus prays for Christian unity so that the world may be saved from the powers of sin and death.

This prayer in the gospel of John is an urgent text. Just after this prayer in the Gospel of John, Jesus is apprehended, questioned, and then condemned to death. Crunch time has come for the believers. Will they remain united after Jesus’s physical absence? Will all that he initiated among them continue and bear fruit? Or will his earthly ministry fade out because his closest followers drifted away instead of coming together?

One of the signs of our time is that we have lost some sense of urgency. Just after 9/11, there seem to be renewed sense of urgency. People came to church in droves. People spoke of the critical role of faith, of the challenge and power of forgiveness, of the need for unity among well-meaning people for the sake of world peace. Has today’s church lost that sense of urgency? Have we lost the urgent call to unity as believers for the sake of those yet to believe?

Mother’s Day can be difficult for families. On a day when many of you have made a special effort to be here in worship with your mothers, others have actually made other plans on purpose, plans to be away on this day. Some who have lost their mothers are grieving today. Others who have had a strained relationship with their mothers want to avoid those memories. Still others who would very much have liked to become a parent find the celebrations of this day onerous. Family life can be difficult, and it is not hard to find something that can divide us.

Jesus prayed that those would become believers would be one, as Jesus and the Father are one, as Jesus and the first disciples were one. Jesus commissioned them that fateful night to continue what he had begun, to share his message of love and faithfulness with all who would hear. And that small band gathered in the upper room did just that. They spread his message of love and faithfulness throughout the known world, at great risk to themselves, but also with great effectiveness.

Jesus knew that the most effective form of reaching the world would be for his followers to be united. Jesus is not asserting hear any kind of victorious hegemony. He’s not asserting unity of the nation for the sake of defeating enemies. The mindset here is critical. The mindset of Jesus is that he wants to save the world, not defeat it. Jesus may want to defeat the evil power at work in the world, but not defeat the world itself. “For God so loved the world,” the gospel of John proclaims, “that he gave his son Jesus so that the world may be saved through him. He came not to condemn the world, but to save the world.”

Jesus pleads before God for unity among his believers so that the world may come to believe, and in believing, have life in his name. Loving unity of the Church is attractive to the world; disunity is unattractive. Unity of the Church is critical for the spread of the gospel; disunity harms the Church’s message and limits the reach of the revelation of God in Jesus Christ.

I am aware of at least four persons, about 60 years old or so, who in the last six months died suddenly from heart failure or stroke. I am aware of several attempted suicides in the last several months among persons who struggle with depression. We have all become aware of the four University of Georgia students who died suddenly last week in a tragic car accident. When we consider such events, how important, really, are the issues that divide our families?
In the face of death, how important are the issues that divide our churches?

Last Sunday, when we had 12 members of the confirmation class standing before us, I was struck by the realization that that was the same number of those original disciples. The same number, that little band of disciples, began a united movement which became the Church of Jesus Christ throughout the world. The Holy Spirit, working through common folk like our confirmation class, accomplished abundantly far more than all they could ask or imagine. Among the first tasks of our confirmation class, as new members of the Church, is to remember and take to heart this prayer of Jesus for his disciples, this prayer for unity, and to seek to live into that prayer as best they can.

Jesus prayed for unity among believers because he knew that unity would influence the salvation of the world. Can we live into that prayer as the Church today? With the gift of the Holy Spirit, we can live that prayer that Jesus prayed. We can do all things through Christ who strengthens us. We can be one, not only for our sakes, but for the sake of the world. Amen.