Walking in Faith
/
Update Required To play the media you will need to either update your browser to a recent version or update your Flash plugin. 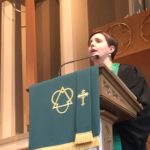 Dry bones and a dead man. A weary prophet. A day late savior. Grief. Despair. Lost hope. Beyond hope. Past hope. No hope. Resignation. Sadness. That which is dead is dead. What else can it be? Dry and dusty bones, long dead. A body four days in the tomb, the funeral spices no longer covering the stench, the soul long gone. What is your valley of dry bones? What part of your life is four days in the tomb? Where have you lost hope? What, to you, in your life seems impossible even for God? Where is the boundary line around your belief? God can do this but God can’t do that. God can’t cross that line. I imagine we all have a boundary line around our beliefs. It’s a line we think even God can’t cross. It’s not something we like to talk about or perhaps it’s not something that we’d ever admit to but I think there may be situations and circumstances in our lives we think even God can’t handle. But these bones are dry, we say. But he’s been in the grave for four days, we say. But she’ll never believe. But he’ll never give up drinking. But I’ll never be happy. But I’ll always be angry. But he/she/they will never get better. God can do a lot of things but God can’t do ________.

Managing God is much easier than believing in impossibilities. Deciding what God can and cannot do helps to keep our expectations in check. It’s one more way we try to exercise control in our own lives. If we are certain that God can’t or God won’t, then we’ll never be surprised for good or bad and this life we are living will feel less out of our own control than it really is. Our certainties can bind us up and leave us in the grave, if we’re not careful. Rachel Held Evans, in her book Searching for Sunday, says “It seems the most likely to miss God’s work in the world are those most convinced they know exactly what to look for, the ones who expect God to play by the rules.” I might actually modify that a bit and say that we miss God’s work in the world when we expect God to play by our rules. Now, it’s hard to miss dry bones coming to life and a dead many walking but we can see even in these wondrous stories that what happened was probably not the expected outcome. After all, dead is dead or so we believe.

God asked Ezekiel, the prophet, if he believed the dry bones could live. Ezekiel answered, “Lord, you know.” I imagine an inner thought of something like, “Umm, I doubt it.” But to his credit, Ezekiel, whether he was filled with faith in God or simply acknowledging the possibility that God knew more than he in that moment, answered, “Lord, you know.” and did as he was commanded and prophesied to a hopeless situation not once, not twice, but three times. How often are we asked to do the same? How often are we asked to speak hope into hopeless situations? To shine light in darkness? To declare the Good News of God’s saving grace and unending love to those who are without hope, grieved, resigned, or facing impossible situations? It’s our call as people of faith to stand and say what we believe so that others may know. It’s our call as people of faith to share the love of God at all times and in all places. It’s our call as people of faith to claim God’s transformative power even in the face of death. I can’t say whether Ezekiel expected the bones to live or not but they did. He did as he was commanded whether he believed it possible or not and the bones lived. From death to life. God’s power revealed. Something transformative outside of expectation.

Lazarus was ill and apparently close to death. Mary and Martha sent a note to their friend Jesus letting him know that his friend, Lazarus, was sick. And Jesus didn’t go right away much to Mary and Martha’s disappointment. In those lingering two days, Lazarus died and if only Jesus had been there maybe it wouldn’t have happened. That’s what his sisters thought. They thought Jesus could have prevented this whole thing. Instead he showed up a day late when it was too late. There’s a significance to the four days. Rabbinic tradition stated that the soul hovered around the body of the deceased for three days. For three days hope hovered. But on that fourth day, hope was lost. So, Jesus was late, too late. The sisters and the mourners were distressed. Couldn’t this guy who opened the eyes of the blind man have shown up on time and saved us all this pain? Couldn’t this guy who claims to be the Messiah have hurried and arrived in time to save Lazarus from death? Jesus was grieved, too. Their distress was evident and upsetting. He, too, lost someone he loved. This isn’t some stranger laid up in a tomb. This is his friend whom he loves. So, Jesus wants to see the body. He wants to see where his friend is buried. Death feels like the end, doesn’t it? It’s the end of what we know. In the minds of those gathered, death is beyond even the power of God. This is the boundary that can’t be crossed. Little did they know or realize or believe that God is in the business of bringing dead things back to life, to quote Rachel one more time. God is in the business of bringing dead things back to life.

We know the end of the story. Jesus asks the crowd to roll away the stone, he shouts, “Lazarus, come out!” and Lazarus does still bound in his grave clothes. I can’t say with certainty whether those gathered expected Lazarus to come out of that tomb. My guess is they didn’t. My guess is they were floored at this turn of events. And in the midst of stunned disbelief, Jesus asks one more thing of them. He commands the crowd, the community, those who loved Lazarus and wept for him to unbind him and set him free. The unbinding was theirs to do. The setting free was theirs to do. I imagine Lazarus would need some help stepping into this new life Jesus had given him. That part was left up to the community. From death to life. God’s power revealed. Something transformative outside of expectation.

What is our calling, people of God? What is ours to do, church? To believe beyond belief. To believe beyond the boundaries we’ve drawn. To believe in God’s transformative power to bring dead things back to life even the dead things within our own hearts. We are also called to prophesy and preach into hopeless situations. We are called to unbind and set free those who have been given new life in Christ. That’s our job. It’s what we are commanded to do. And we do these things whether we believe they’ll do any good or not.

In the face of grief, distress, disappointment, and even death, God can bring about new life. That’s the promise of the resurrection. I can’t tell you how that life will manifest itself. I can’t tell you that dry bones will live or that the dead will come walking out of their tombs if we just call their names. I can’t tell you how God will transform your hopeless situation or how God will bring about reconciliation, healing, or comfort. I only know that I believe God does these things. And I believe that if we make a little room for God, if we erase the boundary lines we’ve drawn around our belief then maybe our lives will be transformed into something new.

Thanks be to God. Amen.