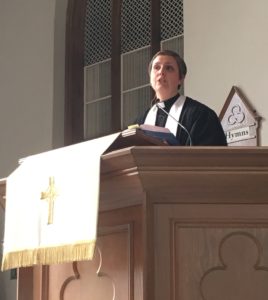 Our story today comes to us from the Old Testament. It’s the story of a young boy and an old priest. The young boy would become a great prophet himself, and the old priest’s vision was failing in more than one way. Listen now for the Word of the Lord to us from 1 Samuel chapter 3.

Two years ago I stood in this pulpit for the first time. It was my first Sunday with you here at Decatur Presbyterian Church. I’d been on the job for a week and in Atlanta for about 9 days. In my sermon that day, I quoted some song lyrics. David Bowie, a favorite of mine, died that week and while my husband Keenan and I were driving across the country from Oklahoma to Georgia, one of David Bowie’s songs came on the radio. I heard the words, I know them well “Love dares you to care for the people on the edge of the night, and love dares you to change our way of caring about ourselves” and as I listened that day I heard these words differently, I heard the voice of God in them. I heard a call. You see, I believe very strongly that God speaks to us in a variety of ways: through Scripture (of course), through song lyrics, poetry, literature, movies, billboards, friends, strangers, really anything at all that might get our attention. “The word of the Lord was rare, in those days; visions were not widespread.” 1 Samuel tells us. These statements are not found anywhere else in the Hebrew Bible. And the descriptor ‘rare’ that is used here is usually used to talk about something like jewelry, of extreme value due to lack of supply. The word of the Lord, extremely valuable and scarce. I wonder, are we listening for it at all?

The voice of God is difficult to discern. I won’t lie to you and say otherwise. It seems difficult to discern even when it’s God’s actual voice calling out a specific name. I’ve often hoped to hear God’s voice calling my name as clearly as God called Samuel’s. It hasn’t happened yet at least not in this way…calling out in the night, clear as a bell. I’ve heard the voice of God before but in subtler ways, through Bowie lyrics and Mary Oliver poems and mystery novels and preachers and teachers and speakers and friends. Sometimes it takes me a while to realize what I’ve heard but I try to keep my ears open, my eyes, too, if I can manage it. The part of this story in 1 Samuel that makes me sad is Eli’s diminished vision. He couldn’t see anymore and I suspect it was in more ways than one. His eyes were failing him, yes, but he also had no vision. The Lord had been speaking to him but he wasn’t listening or perhaps he wasn’t hearing.

Now, the first two times the Lord called Samuel’s name, he didn’t understand what was happening. He didn’t know whose voice he was hearing. It took three tries. And I suspect that if he hadn’t gotten it on that third try, God would have continued calling until he did. Eli helped him get there, though. Eli realized what was happening before Samuel did. And he gave Samuel the best instruction he could: go back to where you were, lay there, and listen. Should you hear the voice again, answer it, “Speak, for your servant is listening.”

The Lord did speak a third time. The Lord stood there and called Samuel’s name. Samuel did as he was advised and answered the call. The Lord proceeded to give Samuel a vision. It wasn’t an easy message. The Lord was telling Samuel something he probably didn’t want to hear. The vision was one of condemnation for his teacher, his mentor, his helper, Eli and Eli’s household, and Samuel would have to speak truth to power. Though when morning came, Eli didn’t want to tell Samuel what God said. He was afraid. Speaking truth to power is scary. Calling out a friend is scary. Holding others accountable is scary. To Eli’s credit he wanted to know exactly what vision the Lord had given to Samuel. Eli was not afraid to hear the truth though the truth meant judgment for him and for his entire family. There is great humanity in this story. There is great humility, too. The voice of God is not easily discerned; we often need the help of those around us. And once the voice of God is discerned, it is not always an easy thing to hear.

The word of the Lord seems rare in our day; visions are hard to see. Prophetic voices are often dismissed or ignored or hushed. Prophets speak on behalf of God and I’m not sure that all prophets realize they are prophets. After all, God speaks in a variety of ways, in any way that will get our attention which requires us to pay attention. The voice of God can come from unlikely people and unlikely places. In fact, I think the voice of God most often comes from unexpected places and may surprise us. Samuel certainly wasn’t expecting to be startled awake by the voice of God in the middle of the night. It’s the unlikely and unexpected voices I want us to pay attention to. It’s in unlikely and unexpected places that I want us to look for God’s vision. If we are only listening for the voice of God in the people we know, if we are only looking for God’s vision in the places we know, I’m pretty convinced we’re not going to hear or see anything new. When God is doing a new thing, we’ll miss it altogether. We must listen to voices that don’t sound like us. We must seek out places and experiences that are not like our own. It’s not only that our world views will remain small if we don’t, I believe that our view of the divine will stay small, if we don’t. God is speaking through people and in places that we cannot even begin to imagine. And God is so much bigger than we can dream.

Have you heard it lately? The voice of God? I have. I heard it this weekend as I read story after story of friends and colleagues who know and love, work and serve alongside the people of Haiti and Africa. And every single one of these stories was a reminder to us all that Haitian people are the beloved of God and African people are the beloved of God. Non-white people seeking safety and refuge in this country are the beloved of God. I’ve heard the voice of God in woman after woman saying #metoo. Voices long-silenced telling their stories of harassment, assault, dismissal, and insult and crying loudly “No more.” I’ve heard the voice of God in passionate faith leaders and community leaders discussing the overwhelming and heartbreaking issues of poverty and homelessness and living wage and affordable housing, strategizing about how to make a change in our community and in our world, lamenting the barriers that are thrown up at every turn just when it seems as though a difference is beginning to be made. I’ve heard the voice of God in children singing praise to God. Voices that say with great confidence, “Why not?” and “Let’s go.” Those voices sound a lot like hope. Do you hear what I hear? God speaking to us in shouts and whispers calling us by name and calling us to do something: to speak up and stand up and lift up and listen.

My mother likes to remind me that no one liked the prophets. It’s meant to be a comfort. And if you read the gospel passage from the lectionary today, John 1:43-51, you’ll be reminded that Jesus himself, his voice, his authority, his word was questioned a time or two. When told about Jesus, the Son of God, Nathanael asked, “Can anything good come out of Nazareth?” Jesus was an unlikely voice from an unexpected place. There were plenty of people who didn’t like what Jesus had to say. He disrupted the status quo and his prophetic word comforted the afflicted and afflicted the comfortable. He spoke truth to power and it was very inconvenient for those with power and privilege. These very human stories that we find in Scripture remind us that God’s voice is unpredictable. And God speaks to us still. God can and does use unexpected people and from unexpected places as holy messengers. Whether we listen or not is up to us. Whether we heed the words of the prophets or not is up to us. I pray that we may listen well and speak boldly for God is calling each one of us by name.