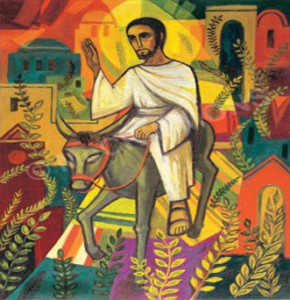 Today’s text from Luke is a familiar one to many of us. Many of us know the story of Palm Sunday but the story we know is usually a combination of the four different triumphal entry stories told by each of the four gospel writers. Matthew, Mark, Luke, and John all give us a glimpse of Jesus’ entry into Jerusalem at the beginning of what we call Holy Week. It’s a puzzling story no matter which way you tell it. And if we pay close attention, we’ll see that Luke’s story, which we read this morning, is a bit different than the others and it’s missing some of the elements we are used to. We’ve got Jesus, of course, and a donkey or the foal of a donkey, a colt, if we want to be really specific and as it’s a reference to a passage in Zechariah, we do want to be specific. We’ve got disciples, as well. And two of them are sent ahead, as in the other stories, to retrieve the colt.

But what we don’t have are palms. There are no waving palm branches in Luke’s version only cloaks thrown on the ground and on the colt. We don’t have any “hosannas” either. And we actually don’t have the usual crowd. Luke calls those who are present for this procession, the whole multitude of disciples. These are followers of Jesus committed to his ministry and message. And it’s not just a few but a multitude, a significant group. It’s a noisy crowd as it is in the other stories and as crowds tend to be. Instead of “hosanna” this multitude cries, “Blessed is the king who comes in the name of the Lord! Peace in heaven, and glory in the highest heaven!” It’s reminiscent of the chorus of the angelic choirs just after the birth of Jesus that we find earlier in Luke. These subtle differences and the missing elements we find in Luke’s version of the Palm Sunday story may not mean much to us in the grand scheme of things but for the writer of this gospel, they mattered.

There is something more intimate about this scene than the ones we find in the other gospels. Humble Jesus sits upon the colt. He is the “Messiah without pomp”, as one commentator puts it. Those gathered throw down their own garments to make a saddle and a path for him. The disciples set Jesus upon the colt…a gesture of honor fit for a king. Here it seems they understand who he is and what he has come for. Here it seems they understand what this procession is for. And make no mistake, Jesus absolutely understands what this procession is for. You see, he had to get on the donkey. Things had to happen in this particular way and Jesus knew it. As was prophesied in Zechariah, “Rejoice greatly, O daughter Zion! Shout aloud, O daughter Jerusalem! Lo, your king comes to you; triumphant and victorious is he, humble and riding on a donkey, on a colt, the foal of a donkey.”

But we can tell even without reading the prophetic text that this scene was pre-arranged. That little bit when the disciples steal a colt but get away with it because they say the magic words? “The Lord has need of it.” That helps us to see that there’s something going on here that is bigger and more mysterious than we can know. And Jesus is fully aware of the imagery his actions are revealing. Jesus is also fully aware of what is to come. That’s one of the puzzling aspects of this celebration. Jesus knows that he’ll ride into Jerusalem in triumph only to be arrested, put on trial, beaten, and killed in a matter of days. Jesus knows he won’t be the kind of king the people are hoping for. He knows he won’t live up to their expectations. He knows he’ll disappoint.

The passage in Zechariah goes on to say that the king will come and take over, that victory will come through power and violence. It’s a bloody passage of scripture. The king who is foretold in Zechariah will overthrow and will do so with military might. Now, we know that’s not the kind of king Jesus will turn out to be. Rather than overthrow governments he will overthrow expectations. He will come in peace and mercy. He will not ride in on a stallion with sword in hand. There will be no military conquest at the end of this story. There will be no glorious earthly throne. He will die for those he came to save. This promised Messiah will be nailed to a cross. So, why didn’t he just avoid the parade? Why didn’t he stay out of town? How did he get on that donkey knowing full well what would happen? Jesus got on the donkey because in doing so he was being exactly who God called him to be.

I’ve heard and read this story many times. I’ve waved palm branches and shouted “Hosanna” on countless Palm Sundays. I’ve come to see the differences in each of the four retellings. And yet, it is still possible for me to see this story in a way I haven’t ever seen it before. It is still possible for me to learn new insights and to discern a new call from this living, breathing Word. I have to thank one of the small groups of this congregation for giving me new eyes to see and new ears to hear. I have to thank them for asking questions of this text that I hadn’t considered before now. I’ll tell you over and over again that the life of faith is meant to be lived together in community and that we learn from each other and it was true for me this week. The question posed to me and the one I want us to consider for ourselves is this, “What happens when you get on the donkey?” Sounds a bit silly, doesn’t it. It sounds a bit comical but it’s a very serious question because being a disciple of Jesus Christ means getting on the donkey.

It means standing up in the face of oppression and injustice. It means standing alongside the marginalized and the downtrodden. It means working for peace and justice when the world around us seems to only be interested in greed and power and violence. It means walking in faith rather than buying into the fear that seems to have taken hold of this world. It means living our lives in the way God has called us to live which may very well be counter to the way others live. And it means doing these things even when we know that we will upset people or disappoint people or fail to live up to the expectations of the world or be completely misunderstood. You see, when Jesus Christ got on the donkey to ride into Jerusalem, he was being all that God called him to be…and he knew that he would upset people and be misunderstood and fail to live up to their expectations. He knew that they would kill him for it.

My friends, we live in a world filled with vivid scenes where greed and violence reign. When I hear the news each day, I realize more and more that we are long past the time for Christians to passively sit by and wait for things to work themselves out. We are long past the time for those who follow Christ, who support his ministry and message to passively wait for God’s kingdom to come on earth. We are long past the time for waving palm branches on the side-lines and shouting about God’s peace when we are actually called to help usher in God’s peaceful kingdom. We are called to actively participate in God’s redemptive work…to prophesy against the power hungry…to do something when we know our sisters and brothers are hurting or are victimized or are marginalized or are hungry…to look past our own needs to the needs of others which is almost always something that is uncomfortable for us. We are called to be bearers of hope for those who have no hope and these days hope is in short supply. We are called to be people of compassion and service. We are called to engage in Christ’s love. We are called to get on the donkey and follow God’s call wherever it may lead.

Because God calls us to be something more over and over again. So, “We have to be braver than we think we can be, because God is constantly calling us to be more than we are.” says one of my favorite authors Madeleine L’Engle. I agree with her. It takes courage to get on the donkey. It takes strength. More than that, it takes confidence in who God has called each one of us to be. And it takes trust in the One who calls us his own beloved children.