Jesus is the Door

Jesus is the Door 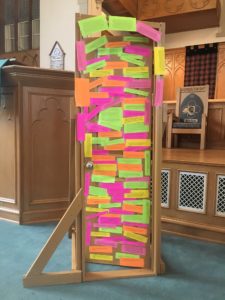 500 years ago, on October 31, 1517, a young Catholic monk named Martin Luther tacked 95 theses or disputes or statements or protests about the practices of the Catholic Church to the door of Castle Church in Wittenburg, Germany. This rather small and quiet act of protest started a movement that changed the world. The Protestant Reformation was born that day and its ripples were felt across Europe and the world. One of those ripples reached Scotland where John Knox initiated the Scottish reformation and the Presbyterian church began. We are Protestant Christians of the Presbyterian persuasion. Our church, as we know it today, was birthed out of the Reformation. Without it, I wouldn’t be preaching today, you wouldn’t have a Bible in a language you can read available to you in the pews, you wouldn’t be singing hymns together as a congregation, and the service may very well still be in Latin. Now, what exactly was Martin Luther protesting in 1517? Well, he had a problem with some specific popular practices in the Catholic Church, at the time. I think that more broadly, though, Luther was calling the church back to something. And our Scripture passage today might give us a clue as to what that something was.

Here now the word of our Lord from John 10:1-10
Jesus the Good Shepherd 10 “Very truly, I tell you, anyone who does not enter the sheepfold by the gate but climbs in by another way is a thief and a bandit. 2 The one who enters by the gate is the shepherd of the sheep. 3 The gatekeeper opens the gate for him, and the sheep hear his voice. He calls his own sheep by name and leads them out. 4 When he has brought out all his own, he goes ahead of them, and the sheep follow him because they know his voice. 5 They will not follow a stranger, but they will run from him because they do not know the voice of strangers.” 6 Jesus used this figure of speech with them, but they did not understand what he was saying to them.
7 So again Jesus said to them, “Very truly, I tell you, I am the gate for the sheep. 8 All who came before me are thieves and bandits; but the sheep did not listen to them. 9 I am the gate. Whoever enters by me will be saved, and will come in and go out and find pasture. 10 The thief comes only to steal and kill and destroy. I came that they may have life, and have it abundantly.

Holy wisdom, holy Word. Thanks be to God.

When Jesus was making a point, he liked to use stories with vivid imagery. He favored agricultural and pastoral imagery I think because it would have been familiar to the original hearers. For his fisherman disciples, he talked about fish and fishing. To farmers and shepherds, he talked about crops and sheep. After all, the good Shepherd knows his sheep. The sheep hear him and know his voice. They follow because he calls them by name and the good Shepherd can be trusted. The good Shepherd will lead the sheep to lush pastures and safely back into the sheepfold. Jesus, the good Shepherd has come, the story tell us, so that they may live: not just survive but thrive. I think that when we hear this particular story we think that it is about who is in and who is out. Who are the good, righteous sheep and who are the bandits and thieves. But this story of Jesus’ tells us a great deal more about the good Shepherd than it does about us. It tells us more about the Jesus than it does about who is in and who is out. That is a concern of ours but not, I believe, of the good Shepherd. The good Shepherd is concerned with abundant life, not merely surviving but thriving.

For some more context around this discourse, we can back up a chapter in John’s gospel and we’ll find a story about a man born blind. After some questions about who is at fault in that scenario (because blindness must be someone’s fault) Jesus restores the man’s sight. Now, this is problematic because Jesus performed this miracle on the Sabbath; healing constitutes work and that’s a Sabbath day no-no. So, the religious authorities aren’t pleased. You see, they were more concerned about the sin that must have caused the blindness in the first place and the manner in which the healing took place than about the healing itself. But as we go on into chapter 10 and this illustration of shepherd and sheep, we can see that Jesus was concerned not with sin or law but with abundant life. I came that they may have life, and have it abundantly, says the good Shepherd. What was abundant life for the blind man? Restoration of sight, transformation of his life. The religious authorities, the church folk couldn’t see that.

I wonder, too, if we do recognize our Shepherd’s voice. It can be difficult to hear in the noise of the world. There are many voices telling us what we ought to do, what we ought to be, how we ought to live. They all promise us abundant life. They all promise us security and certainty and salvation at a low low price. Quick fixes and snake oil. It sounds pretty good even if we know deep down it’ll cost us our lives. These thieves and bandits come only to rob us of the abundant life we are promised by the good Shepherd. It would be nice to have a guarantee of security and certainty and salvation, though, wouldn’t it? If only we could buy our way into God’s favor and into eternity? That’s what the church in 1517 was promising the people and they didn’t know any better. They couldn’t hear the voice of the good Shepherd and other voices were leading them astray. Martin Luther heard it, though. He knew the Word of God. He knew what it said. Sola gratia (grace alone), sola fide (faith alone), solus Christus (Christ alone), sola Scriptura (Scripture alone). A sinner is justified by grace alone (sola gratia) through faith alone (sola fide) for the sake of Christ alone (solus Christus), a truth revealed to us in Scripture alone (sola Scriptura).

When Luther tacked his protests to the door of the Wittenburg church, he was calling the church back to the Word. The church, it seemed, had stopped listening to the voice of the good Shepherd. I can’t say why… perhaps they couldn’t hear it anymore or perhaps their greed was louder, perhaps they liked the idea of a quick fix and a guarantee. This Word that, thanks to the Reformation, we can hold in our hands helps us to hear Jesus‘ voice and discern God’s will. This door here in our sanctuary is covered in the Word of God today. 95 examples of God’s living, active, Word to you and to me and to all the world.

One of the most interesting things to me about the start of the Reformation is that Luther didn’t intend to start it. He disagreed with the church and he said so. He tacked his grievances onto the community notice board so that a conversation would start. I think he wanted to discuss these things. I think he wanted the community of faith to discern together. I think he wanted to call the church back to the word of God. That’s not what happened, though. At that time, the church didn’t want to discern. The church didn’t want to discuss or debate. The church wanted to stay the same even if it meant they’d stopped following the good Shepherd. They didn’t want to hear what Luther had to say because they didn’t like what he had to say so they excommunicated him. They kicked him out. Frederick Buechner says, “We are so used to hearing what we want to hear and remaining deaf to what it would be well for us to hear that it is hard to break the habit.” It is important for us to listen for the shepherd’s voice so that we’ll know which way to go. It is important for us to discern together as a community of faith. It’s important for us to listen for the shepherd’s voice so that we’ll recognize when a change needs to be made. And when we disagree about our call or about the meaning of God’s Word, we ask for the Spirit’s guidance and we go together from there.

The Good Shepherd came that they might have life and have it abundantly, but if we’re not clear on what that abundant life looks like for ourselves and for those around us and we’re not leading others into that abundant life, we’re not doing our job. If we’re only concerned with our own lives and not the lives of others, we’re not doing our job. As we look toward the future and as we move forward together in faith, let us discern where Jesus is leading us to go. And 500 years from now, may it be said that this time in the life of the church was a reformation all its own, a time when we affirmed daily that Jesus’s promise of abundant life is extended to all, and that it is our responsibility as the church to bear witness to that promise in all that we say and in all that we do.