Stretching With Springs, or Building With Bricks?

Stretching With Springs, or Building With Bricks? 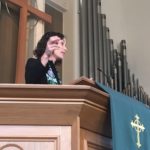 Imagine you are a disciple of Jesus, just a few years after the resurrection of Christ. Now imagine a powerful Jew named Saul out breathing threats and murder towards disciples of Christ. What would you do? Would you invite him over for dinner? Better yet, would you go and seek him out, offer him healing and call him “Brother?” The story of Saul’s conversion is one of many conversion stories in Acts that stretches our minds and expands who we think might be welcomed into the church and especially who might become a missionary of the gospel.

In our world today, I’d say there are just as many times that we are open and inclusive as we are stubborn and closed-minded. I’m not just talking about one group of people being open and the other being closed-minded. Even within our own groups, we can all be closed-minded at times. We pass judgments when a classmate walks into the room and presume they will not fit in here. We assume that teenagers will be this way and grandparents will always be that way. We don’t need to pause because we know the liberals will think this way and the conservatives the other way. No sooner than we’ve heard God’s call and responded, “Here, I am Lord,” we continue like Ananias, “But Lord- I’ve heard about this guy. He’s already done so much evil to your people! You couldn’t possibly want me to go to him?” Or maybe it’s not even that conscious of an effort to close ourselves off from others who are different. After all, our culture and history have ingrained in us to put people (and even God) in boxes.

Recently I read a story about a man named Darryl Davis, a black man and blues musician, who for 30 years has been befriending members of the Ku Klux Klan. This hobby first began when he struck up a conversation over similar music tastes with a white man at a music lounge. After talking music the man remarked that he’d never had a conversation with a black man before. Then he revealed his Klan card.
If you were in Darryl’s shoes, what would you have done? Would you have stopped the conversation there? Would you argue and try to change his mind? Would you have gone home and bad-mouthed the man to your friends? If both men in this story remained closed-minded and stuck to what they believed to be true, what do you predict happened next?

Our politics and rhetoric in the U.S. has become increasingly more polarizing post-election, post-Charlottesville, post-Nashville statement, post-petitions that have been signed against or countering any number of issues that separate us today. In the midst of this I have found comfort in returning to scripture that reminds us of who God is, who we are created to be and how often God surprises us and does the unexpected. I’ve also found encouragement in our PC(USA) Book of Order which gives us theology to guide our lives in and outside of the church. It roots us in always striving to participate in God’s mission in Christ in the world and reminds us of our foundation:

Sounds great on paper right? But what does this look like in reality?

In his book, “Velvet Elvis,” Rob Bell talks about how God never changes but times do. At the same time, we can never fully know everything about God. To me this says that we have to be open to a bit of mystery and to new ways of understanding and living out faith. Bell says, “The moment God is figured out with nice neat lines and definitions, we are no longer dealing with God. We are dealing with somebody we made up .” So he paints a metaphor for how we can view our beliefs in the life of faith: as bricks or as springs.

When our core beliefs are housed in bricks, built into a wall… (stack Jenga blocks) …at first things seem sturdy and strong. But the moment you begin to rethink or even discuss one of these bricks, things start to feel a little shaky. Eventually some things in life begin to change. But bricks never change shape so if you pull one brick out to make a tweak, the whole wall comes crumbling down. (pull a brick out)
Springs, like in a trampoline, however, are flexible. If each of these represent something we know about God or how we view the Christian life… (one foot on trampoline) …what happens when you ask a question or push a little bit further into the mysteries of God? (jump a little) The springs stretch and change shape. Even if you seriously question one spring or reinterpret it’s meaning, the group of springs are still there to hold you up and keep you jumping. The whole trampoline doesn’t fall apart just because one spring is stretched or changed.

When interviewed about that first conversation with a Klansman, Darryl said, “a seed was planted,” because a Klansman and a black man had just sat at the same table and enjoyed the same music. So he studied up on Klan beliefs and made it his goal to get to know more of them. He befriended members of the KKK and after forming relationships with them it seemed that some of their ideology was chipped away in discussions where stereotypes and misconceptions were brought up and proved not to be true. Darryl says, “When two enemies are talking, they aren’t fighting. It’s when talking ceases that the ground becomes fertile for violence. If you spend five minutes with your worst enemy- it doesn’t have to be about race, it could be about anything…you will find that you both have something in common. As you build upon these commonalities, you’re forming a relationship and as you build about that relationship you are forming a friendship. That’s what would happen. I didn’t convert anybody. They saw the light and converted themselves.”

For over 30 years Darryl has befriended KKK members and 200 of them have given up their robes, not because Darryl forced them to but because two people were open enough to sit and talk and through talking became friends and by becoming friends had their minds stretched and opened to the different possibilities of what the other could be.

When Saul first saw the light, he was blinded and it was the Spirit at work through the disciple Ananias that brought him healing and it was the Spirit of God who sent this new missionary to proclaim the gospel and bring people of different cities, backgrounds and social standings into the community of Christ’s disciples. All because two people were open enough to sit down together and form a relationship through which God could work.

As followers of Christ, we follow the one who stretched the minds of the crowds and the rulers and ministered to the ones who had been excluded in the name of God . We strive to be like the one who in the face of fear and death stood up for grace, for inclusion, for openness and to the mystery that God could do far more than we ever can imagine. Instead of building a wall, Christ opened the door and invited others to come and join him. So long as we are building brick walls we will think we know the whole story. But with our beliefs in springs, we can invite others to come and jump with us and have our minds opened to new angles of the story and new ways of living as brothers and sisters.

As we strive to be open-minded, a good place to start is with ourselves:

And as we do, may we remember the doors that Christ has first opened for us and the table where Christ has proclaimed, “all are welcome.” As we partake in the joyful feast today, may we be open to how God will transform us and pray to be nourished in ways that send us out to see, talk and love our enemies as a brother or sister instead.