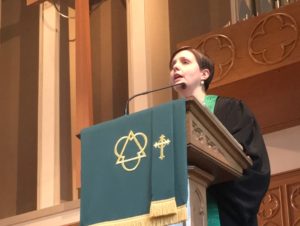 Our gospel reading this morning is found right in the middle of Mark. Remarkable, I think that this story is in the middle which means we’re halfway through Mark’s gospel and just before the story that we read today we are told that while Jesus and his disciples were traveling to Caesarea Philippi, Jesus asked the disciples “Who do people say that I am?” They answered, “John the Baptist, and others Elijah, and still others, one of the prophets.” It seems there was no general consensus. We may know what people have to say about Jesus, too. He’s a sound teacher, a good man, a prophet, an example for living, the only part of Christianity worth holding onto, perhaps? Jesus then asked them, “Who do you say that I am?” An all important question for the disciples and for us. Peter’s answer is, “You are the Messiah.” Remember that the Messiah is the expected deliverer, the anticipated savior, the long hoped for redeemer.

Peter had just finished declaring that Jesus was, in fact, the Messiah when Jesus began to tell them about the future…not just his future but their future, as well. Jesus told them that he would suffer. He told them that he would be rejected by the people in charge: the elders, the chief priests, the law experts, anyone with any kind of power. He told them that he would be put to death and that he would die. He also told them that he would be raised from the dead three days later. How could this be? What is he talking about? Perhaps they all protested loudly but we only know about Peter. And I always wonder about the conversations that are left out of Scripture. The text says that Peter took Jesus aside and rebuked him. To rebuke means to express sharp, stern disapproval; to reprimand. Peter reprimanded Jesus for what he said to them. We are not privy to that conversation but I would guess it was heated and tense. “Don’t say that, Jesus. Stop lying to us. You’re not going to be killed. You’re not going to suffer. Don’t say things like that.” Peter scolded Jesus for saying such terrible, impossible things. What could elicit such a response from a devoted disciple? A misunderstanding of Jesus, his message, and what it meant to be his disciple? Expectations turned upside down? Or perhaps simply: fear. Peter and the others were frightened by Jesus’ words.

They were afraid for Jesus and for themselves. What if he was telling them the truth? What if all that he said would happen actually happened? We know that it was true. We’ve read the end of the story. We know that Jesus did suffer, was rejected, was put to death and on the third day he rose from the dead. We know that but they didn’t. And the disciples’ fear is totally understandable. This wasn’t what they bargained for. This wasn’t what they expected when Jesus called them by name, when they dropped their nets and followed him so Peter rebuked Jesus and Jesus rebuked Peter right back. Jesus said, “Get behind me, Satan! For you are setting your mind not on divine things but on human things.” There it is. Human things. Human worries. Human fears. These things are in stark contrast to divine things. Turns out, Jesus would not be the Messiah they thought they were getting, powerful and mighty and ready to overthrow the government and reign forever and ever amen. Jesus the Messiah would have to suffer and be rejected and die and rise. Jesus the Messiah would change the definitions of weakness and strength. Jesus’ glory would not come from triumph but from tragedy. There would be less crown and more cross. The glory of the cross was something that no one expected. And the glory of the cross didn’t make much sense.

This last week was the 50th Anniversary of the television show Mr. Rogers’ Neighborhood. Most Presbyterians I know love to tell people that Fred Rogers was an ordained Presbyterian minister. I’ve read a lot about him in the last week. Fred Rogers saw his show as a way to share the grace of God. He pastored millions of children without their being aware of it. He emphasized the worth of every person regardless of gender, race, creed, or economic background. He taught us that we, as human beings, need one another. He taught us to care for one another and to help one another. He taught us to be good neighbors. He knew well that to gain your life you must first give it away. You must look to the welfare of others. You must share what you’ve been given. You must give up the stranglehold you have on all that you think belongs to you whether it be the love of God or your self-reliance or your wealth or your time. You must deny yourself.

Now, that phrase ‘deny yourself’ could be problematic for us because we could hear that phrase and believe that we are to deny who we are as individuals created by God. That’s not what Jesus meant. Jesus never denied who he was as God’s Son. He never denied being who God created him to be. He lived fully into that identity. He knew who he was and he knew what he was called to do. Jesus denied any selfish part in him that said he didn’t have to do what God was calling him to do or be who God was calling him to be. The call to love and share and give and be a good neighbor is not one that we get to ignore. We must deny the parts of ourselves that say otherwise. We must deny the parts of ourselves that say we can make it through this life on our own with no help at all, thank you very much. Beloved, the life of faith is not a solitary one. The life of faith is meant to be lived in community: a community that weeps with those who weep and rejoices with those who rejoice.

We try to do that here. We try and sometimes we fail and then we try again. A professor of mine reminded me this week that “In spite of all the (in large part justified) complaints about the hypocrisy and complacency of churches, they remain necessary for one simple reason: We need each other. This is also true of synagogues, mosques, temples, ashrams, and all the other places that people gather to call upon the ultimate as they hold each other up. It is not good for the human to be alone (at least not all the time).” I think Fred Rogers would agree with Dr. Johnson on that point. To deny or brush aside that deep need would be to proclaim a false gospel. The life of faith will bring with it suffering and rejoicing. Following Jesus Christ promises both. The good news is that we love and serve a God who promises to be with us: in the mess, in the mix, in the grief, and in the joys of our lives. Because God does this for us, we do the same for each other. And so, we need one another. We need to wade into the mess of this world together. We need to practice this life of faith together. We need to pray for one another and encourage one another and love one another.

It’s been a season of loss in the last month or so here at DPC. We’re coming up on our seventh funeral in the span of about a month and that doesn’t count all of the losses of loved ones our members have experienced in other places or the overwhelming grief in our world. It’s heavy but I’ve watched this community come together to support grieving families, to tie balloons of awareness, to take flowers and food, to be present with and to pray for, to listen and to learn. To do those things, to care for others you must step outside of yourself and enter into the life of another. You must deny yourself, give away your own life, and in turn you will gain the only life worth living. This is the promise of our Messiah. This is the glory of the cross. Death defeated in favor of life abundant.