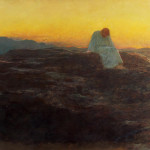 On this first Sunday of Lent, we begin a series in which we will explore encounters of Jesus on the way to the cross. Jesus encountered all sorts of people and situations during his earthly ministry. Today, we explore his encounter with the Tempter, the “Evil One”, that power beyond ourselves that while perhaps not incarnate, is very real, and still very much at work in the world.

Whether you consider “the devil” as a personal being or as a symbol for the total sin of the human race, there is no doubt about the objective reality of the power of evil, the power of that which is against the will of God. Jesus was tempted not only from within his heart, but also by a force from without – that external, objective force of evil that wreaks havoc in human life and relationships.

Medical experts report that a human body can go 3 -4 minutes without oxygen. Some Olympic swimmers and some naval divers can hold their breath for that long. The human body can go 3-4 days, in general, without any water. Some of you who have sat by the bedside of a loved one in hospice understand what happens to a body when someone is no longer able to swallow. The human body can go 3-4 weeks or more without food. Some hunger strikers have gone well over 50 days or even 70 days with no food intake. Gandhi, at age 74, as part of his non-violent protests, went for 21 days in one of his 17 hunger strikes.

Luke reports that for forty days Jesus went without food in the wilderness. Imagine the state of your mind and body after forty days with no food. Snickers has reminded us in their commercials how different some people can be when they miss only one meal! At end of this trying time, when Jesus was literally starving, when his body was beyond weak, when his soul was tired, when his mind was not clear, Jesus encountered the powerful force of temptation.
Have you found this to be true – that when we find ourselves in a weakened state, when our physical or spiritual resources are spent, this is when are often tempted to do something we would not normally do?

The first temptation of Jesus by the devil was economic, related to the material world. Son of Man, if you are Son of God, turn these stones into bread. You are hungry. Your body has needs. C’mon Jesus. You need this in order to live, really live. Pay attention to your appetites; fill yourself with good things. Why not? Don’t you want to enjoy human life and its pleasures? This is within your reach to do this; you could do this and no one would be worse off.

We know this temptation – the temptation to do something we know that we should not do. Even if it seems in our self-interest to do so, or in the interest of others, like turning stones into bread. What could be wrong with bread?
Even if our family, or the poor, or some oppressed group may benefit, if it is not right, or not according to God’s will, then we should not do it.

Someone once said, “We are only truly tempted to do that which is within our power.” Imagine the temptation of Jesus!! All things were within his power, but Jesus replied to the temptation, “Humankind does not live by bread alone, but by every word that proceeds from the mouth of God.”

The book of Deuteronomy, which Jesus quotes, is clear—feeding ourselves first on the Word of God has to do with humankind’s ability to live long and prosper in the land that God has given us. Human beings will not survive on earth if we feast ourselves on bread alone, if we pursue our material appetites to the neglect of our spiritual lives,
or to the neglect of love for neighbor, to the neglect of care of the earth. Humankind’s most basic need, even before bread, is fellowship with God. The Word of God keeps us from losing ourselves or losing our principles by following our appetites. The Word of God keeps us from killing our neighbor over resources, or abusing the good earth we have been given for the sake of short term gain. “One does not live by bread alone,” Jesus quoted from Deuteronomy, “but by every Word that comes from the mouth of the Lord.”

The second temptation the devil offered to Jesus was political, related to worldly power. Jesus, I’ll give you authority over all the kingdoms of the world, the devil taunted. Follow my way and you will not only gain the nomination for your party, you can even become President of the most powerful nation on earth! C’mon Jesus. If you take my offer, you can make your nation great. You can throw off oppressive taxes, you can change heathen ways, you can even make congress and the Supreme Court work for you. Follow me and you can fix everything you think is wrong and set it up just like you want. Political power is yours, if you just give in to my temptations, said the devil.

Jesus must have yearned for the political deliverance of the Jewish people. He grew up witnessing oppression and injustice; he had watched his people suffer. But again, he refused to be tempted. Again he recited Scripture, “It is written: Worship the Lord your God, and serve only him.”

Worshiping the false god of power is a tremendous temptation for those in public office and for those who seek to elect them. There is tremendous temptation to bow down and serve anyone or any group who promises to solidify our power, or to follow them down a path we know is not good. John Calvin claimed that the call to public office was the highest calling of all, and politics is the perhaps the best long-term means of encouraging the common good. But human beings are self-interested and sinful, and so any political agenda, no matter how “Christian” or “just” it may seem, will always be blemished by self-interest.

It can be so tempting just to go along to get along, to give in, to follow in a path that we know is not right. It is not easy to follow God’s way of suffering, self-giving, costly love in Jesus Christ. Only the power of love willing to suffering loss, as demonstrated on the cross, will ultimately deliver us from the silky ways of sin in the world.
Political platforms, or social movements, or simply the direction your family or friend group is going, must always be subject to serious biblical critique. The question comes down to this: Whom we will serve – God, ourselves, or someone else? In the face of devilish temptation, Jesus recited Scripture: “Worship the Lord your God, and serve only him.”

The third temptation of Jesus was related to spiritual power. The people won’t believe you, the devil said. They won’t accept you; they’ll turn away from you. They’ll even go so far as to kill you, and you know it. Come on, Jesus. How about this? Just throw yourself off the top of the temple, fly through the air into the midst of the crowds on the Sabbath, then touch your feet down as soft as you please. Thrill the people, amaze them with your powers, give them what they want. None of that suffering Servant stuff, Jesus. Show them power; coerce them into belief, then you’ll have them wrapped around your finger.

We know this temptation as well, the temptation to misuse whatever power we have, the temptation to connive and manipulate. If the church is to guard against the dangers of economic power and political power, then surely we will pour all our energy into such “spiritual” work of salvation, into converting unbelievers with flashy and convincing programs. Why shouldn’t the church devise strategies which will coerce people into belief so that they will worship and serve God? People are so easily fascinated with the wonderful and the marvelous. Just show them a healing miracle or amaze them with personal experiences of God’s power.

Once again, Jesus refused to be tempted. Instead of responding to the temptation to “Wow” people into belief, he responded with Deuteronomy 6:16: “You shall not put the Lord your God to the test.”

We are called to participate actively in what is going on in the world, but we are not called to misuse whatever influence or power we may have, whether at home or at work or among friends, in ways that are not according to God’s will.

Three times Jesus was faced with tremendous temptation. Three times he responded by quoting Scripture – a worthy example for any of us in a time of trial.

Jesus was tempted as we are, and yet without sin. His defense against temptation was Scripture. He had read and learned and taken to heart significant portions of Scripture which became his strength in time of need.

In order for us to be prepared for the temptations that will inevitably come, we too need firm footing on the foundation of Scripture. We need at our disposal the sacred texts that can guide our decisions and keep our lives from evil, especially when we find ourselves in a weakened state.

Perhaps these next 40 days of Lent prior to Easter could become for us a time of preparation, a time to garner ourselves for whatever trials may inevitably come. Perhaps, with the Spirit’s help and encouragement, we could immerse ourselves over the next 40 days in daily Bible reading, so that when temptations inevitably come, we will have the resources to withstand.

As a human body cannot live with oxygen, water, or food, so the human soul cannot thrive without the Word of God.
Isaiah 55 proclaims: Ho, everyone who thirsts, come to the waters; and you that have no money, come, buy and eat! Come, buy wine and milk without money and without price. Why do you spend your money for that which is not bread, and your labor for that which does not satisfy? Listen carefully to me, and eat what is good, and delight yourselves in rich food. Incline your ear, and come to me; listen, so that you may live.
Amen.

(Image credit: Christ in the Wilderness, by Briton Riviere, 1898)